In the exhibition Hitching Their Dreams to Untamed Stars: Joyce J. Scott and Elizabeth Talford Scott, it’s difficult to determine who influenced who—and even to differentiate, in some instances, which of the nine pieces was done by which artist.

It’s evident, however—in the asymmetrical, mixed-media textile pieces, the rich colors that vibrate with life, and the stories and meaning woven into each piece—that this mother and daughter, who lived and worked together in Baltimore for 60 years, influenced one another deeply.

“People ask, ‘What’d your mom say to you?’ She said to never give up . . . Just follow that dream and never stop. Persevere. Everything is out there for you,” Scott recalls at the Baltimore Museum of Art during a preview of the exhibit, which opens publicly on May 15 and runs through December 1. “That has been the code for my life.”

She’s cloaked in colorful batik and tie-dyed fabric and sitting in a wheelchair, looking regal (she assures everyone in attendance that she’ll be out of said wheelchair and dancing again as soon as her knee is in better shape). “I come from people who couldn’t be who I am right now who opened that door for me to come through, and I’m very proud to be someone who’s carrying this with me.”

Scott learned quilting from her mother (and her mother learned it from her mother), and both primarily create mixed-media fiber art, though Scott, named a MacArthur Fellow in 2016, became more well-known for her sculptural beadwork and jewelry.

Aside from indirect influence, the mother-daughter duo has directly collaborated to create pieces, too. Talford Scott began “Fifty Year Quilt” (not shown in this exhibit) in San Francisco when she was young, for instance, and wherever she traveled, she’d add fabric. When Scott was born, she got to work on that same quilt, adding more stories of places traveled. They also made beadwork and dolls together, sang together, and talked at lectures together before Talford Scott passed away in 2011.

The piece “Face,” made in the 1970s and included in Hitching Their Dreams, was also created by both of them: Scott wove its colorful wool in response to her mother’s storytelling.

Scott has never been known to shy away from controversial imagery and subject matter either. Some of her work is overtly subversive, either artistically or politically or both (think “Inkisi #2,” her mixed-media sculpture of a woman whose large skirt is affixed with, among other items, bright green penises—representing procreation, she explains).

Talford Scott’s “Plantation” is an example of quilts that were made and used as escape routes for African Americans wanting to flee a plantation in the South. Creating something beautiful that represented something else entirely was a lesson taught to Talford Scott by her grandparents—how to hide in plain sight. For instance, a 20-inch row of the fabric in this topographical map might represent a line of cotton or vegetables. The stars that fill its white background represent the stars they would view in the night sky overhead that could be used for navigational purposes, making the piece both whimsical yet practical, artful yet political, comforting yet tense.

Scott says she has a “classic Negro history.” “My mom picked cotton and my father picked tobacco. They were in the Great Migration from the South . . . not only to get jobs that were better, but so that they wouldn’t be harassed by nightriders every night in their communities. And then they had me.” 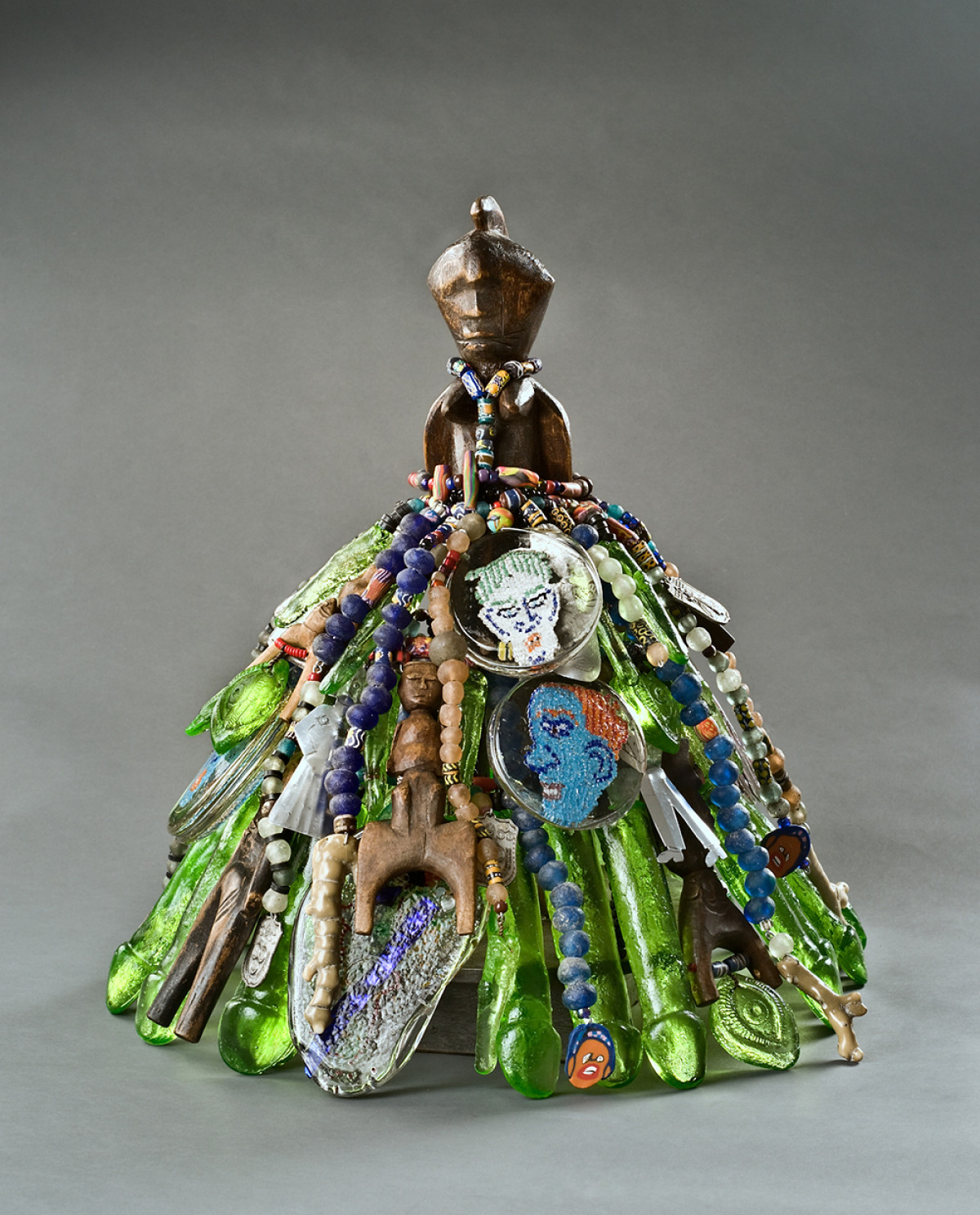 Her mother and father attended one-room schoolhouses—roughly equivalent to a sixth-grade education today—but that didn’t stop Talford Scott from bringing her young daughter to the BMA, after her family relocated to Baltimore. It didn’t stop her from believing in Scott’s artwork and cheering her on, telling her she could follow her dreams, a reference Scott makes in the show’s title.

Scott lives in Upton, which she admits can be a rough neighborhood, but it’s home. “I don’t believe the change happens by running away from yourself,” she says, “I believe that when you stay in a community, you make a difference.”

People in Scott’s neighborhood call her “Mom,” just as they called Talford Scott, who would make her own wine and sit around and talk and teach people in the neighborhood to make art.

Scott recalls a talk she gave with her mother at the University of Colorado Boulder, where they were invited to speak to a ceramics class. Her mother talked about how she and her family would make pinch pots during the Depression, because you had to make your own pots for everything. And those things that you made could be beautiful. The class listened in awe, mouths agape. Even Scott was impressed, having heard similar stories as a young child but hearing them again provided new context.

Growing up in Sandtown in the ’50s, Scott was surrounded by stories like this—relatives working as sharecroppers or running and hiding from people who were after them or paying people off with bootlegged drink.

“There’s something about living in the 21st century that is very, very different in the United States, more than other parts of the world,” she says. “When my mom and other people of her generation go, that’s it. You can look them up online, you can even hear them talking online, but that thing about sitting next to them, having a shot of Hennessy or something, and hearing her talk.

“That old generation is taking with them their knowledge and secrets of the past that we in the West don’t always even celebrate,” Scott goes on. “But you go to Asia, you go to Africa, you go to Central America, and you meet that exact woman who is just like my mom, who’s still tilling the soil or spinning something with her grandkids, talking about stuff in the exact same way. I think it’s a loss for us, for our speed to be so future-[oriented]. It’s not giving the props to the past that built all of us.”

Originally published by Baltimore magazine, May 2019.